The day has finally arrived. Activision has, at long last, revealed its new battle royale, Call of Duty: Warzone. We’ve reported on leaks and rumors for this mode since August of last year, but today marks the first time we’ve seen anything official about Warzone.

As was rumored, the battle royale will be free-to-play for all players, so you don’t need to own Modern Warfare in order to download it. However, your download size for the mode will be significantly less if you’ve purchased Modern Warfare. Warzone releases tomorrow, Mar. 10, on all platforms.

Free to play for everyone.
Drop in tomorrow March 10th. #FreeCallofDuty pic.twitter.com/URU1Yg4wjk

The cat’s been out of the bag for quite some time within the community. We saw several leaks, including the infamous promotional image from a couple of weeks ago. However, we’re now getting to see actual gameplay and more details about Warzone.

A couple of weeks ago, many creators were flown out to Los Angeles to play Warzone early. This is customary for any new content in Call of Duty, as Activision likes to get as much publicity as it can. As such, there are around five minutes of gameplay from various sources on social media.

Call of Duty has also revealed how big the download sizes will be for players who own Modern Warfare and for those that don’t. 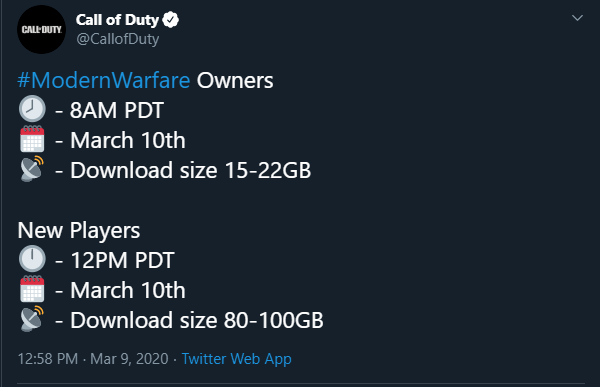 Five things to know about the Microsoft and Activision Blizzard deal

Five things to know about the Microsoft and Activision Blizzard deal