OpenAI challenges team of Dota 2 professionals at The International 8

OpenAI challenges team of Dota 2 professionals at The International 8

OpenAI recently announced their team of 5 players — excuse me, 5 neural networks — named OpenAI Five. And in the testing phases, OpenAI’s team defeated human players quite easily. However, things are changing in the DOTA 2 scene as it did in The International 7 last year.

At The International 7, OpenAI introduced a bot designed for 1v1 matches. In somewhat surprising fashion, the bot defeated almost all of the players it faced. This year, OpenAI wants to challenge a complete team of professionals.

The OpenAI Five has played over 180 years of DOTA 2 in a few weeks against itself. OpenAI basically just used last year’s system and bumped it up a tiny bit. The astonishing part is that the bots learned basically everything by themselves. They didn’t take any input whatsoever from human games.

Who Will OpenAI Five Face?

It’s not yet known which team or players will be taking on the OpenAI Five. However, the details of when and where the match will be happening have been disclosed and can be found below.

To be enthusiastic, we could try and guess that it will be either one of the top teams, or a team made up of top players. Maybe it will be Team Liquid, the shining champs of The International 7. Or Virtus Pro, the CIS team that has every other team shaking this year. Or we could expect a curveball featuring all top tier players!

This is merely speculation out of excitement though and we will have to wait to know for sure. What we do know is that this is a can’t-miss match that we are very much looking forward to watching. 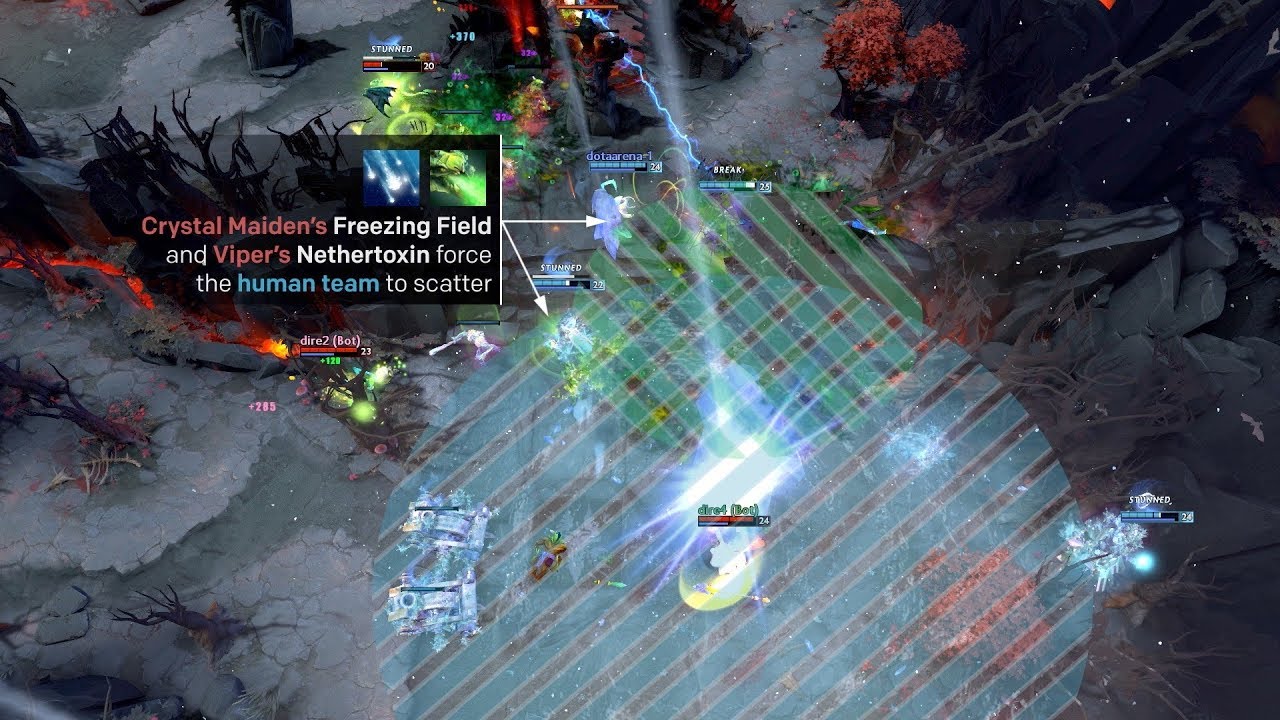 When and where to watch the OpenAI Five

The bots will be playing a top-tier team on the 28th of July and the match will be officially broadcast on Twitch. If you’re in the San Francisco area around that date, you can also watch the match live. You can grab tickets here, provided that they’re still available.

OpenAI has stated that their mission here is not to become champions. The artificial intelligence research company’s main objective is to learn. This match will act as an exhibition of all that the bots have learned so far, while simultaneously continuing to train the program with new situations. It will be interesting to see how the AI reacts to the curveballs thrown by the players and the unique scenario of fighting against some of the world’s best Dota 2 pros.

More details about the match

Similar to the TI 7’s 1v1 Shadow Fiend matches, this 5v5 battle at The International 8 will have some restrictions. The following rules are set for the match:

As highlighted above, both teams will be picking the same 5 heroes. The players will be without many of the resources they’re used to having at their disposal. This can obviously play a very large factor in determining the outcome of the game.

This match can range from anywhere between intense and competitive to a total clown fiesta. We can’t wait to see how it turns out.

Vanille Velasquez on voicing Neon and Zeri: ‘Back in the day, there wasn’t a lot of Filipino characters’

Microsoft agrees to acquire Activision Blizzard for over $68 billion