When it comes to esports, especially those made by Riot Games, South Korea has been historically dominant. However, for the past two years, the KR region hasn’t been able to live up to the hype when it comes to global competition in Teamfight Tactics. At the second ever TFT World Championship, 8LJaywalking and South Korea put the world on notice once again.

Despite being an afterthought, South Korea’s 8LJaywalking was able to fend off the most feared players in the world. He went on to capture the TFT Fates Championship netting him over $40,000. But, more importantly, another prestigious trophy for South Korea’s esports legacy.

8LJaywalking’s journey to the the finals

Some @TFT Fates Championship 8lJaywalking stats to blow your mind.

Absolute beast of a player the entire week. pic.twitter.com/yR7RqBrJ9M

Due to the insane hype surrounding the North American and EU regions, not much attention was on Korea, let alone 8LJaywalking. After all, Korea only received three invites to the world championship. EU had six, China had five and NA had four. When it comes to the number of invites, Korea going into the event was only the fourth best region. Even then, regions like OCE and Brazil staked their claim among the games best.

8LJaywalking, despite winning the Korea Regional Finals, was not a known name coming into the TFT Fates Championship. Other players like Turkey’s Ging, China’s Juanzi and North America’s Mismatched Socks were among the tournament favorites. Even 8LJaywalking’s fellow Korean qualifier, sCsC was getting more attention due to his prestigious esports background.  He won a Heroes of the Storm world championship that he brought back to Korea in 2016. 8LJaywalking was just an afterthought.

However, when it came time to perform, 8LJaywalking put on a consistently dominating performance. But, even during the tournament he was being overshadowed. On day one of the event, North America dominated. Three of the four qualifiers from the NA region finished in the top four in points during the first five rounds of competition. The other player in the top four? 8LJaywalking. In day two the narrative shifted to EU dominating as two of the three players at the top of the leaderboard going into the third and final day were from EU. The other player in the top three was once again 8LJaywalking.

Even during the final day, it was Europe’s Zyk0o who emerged as the favorite to bring EU its second world championship. After the third game, Zyk0o sat alone at the top of the standings, on the back of some extremely risky Fortune comp play. The hero from France won back-to-back lobbies in games two and three to put him alone at the 18 point threshold. The next win from Zyk0o would end the tournament. 8LJaywalking, on the other hand, had his work cut out for him. After three rounds, Jaywalking was sitting near the bottom of the standings.

Ironically, 8LJaywalking picked the best day to have a slow start. Due to the unique format, the final day had the tournament end with the champion winning a game after hitting a point threshold. All 8LJaywalking had to do was get hot for a couple of games. He did just that.

In game four, 8LJaywalking put on one of the most dominating single game performances in the world championship. In that game, he piloted a very powerful Dragonslayer composition. The comp was led by a triple carry threat of Olaf, Aurelion Sol and Samira to net Jaywalking a first place victory at above 60 HP. The win denied Zyk0o his world championship win while also putting Jaywalking at check point too, along with four other players. Going into game five, it was do or die for 8LJaywalking. Six of the eight players remaining could end the tournament with a win, which would crown the final game winner the TFT Fates champion.

As players were being eliminated left and right, 8LJaywalking came face to face with Zyk0o once again. As the field narrowed, the four remaining players in the event were Oceania’s Razza and North America’s RamKev, along with Zyk0o and 8LJaywalking. Zyk0o looked unstoppable; an early Samira two star with a fully upgraded slayer board spelled doom for everyone in the lobby. Razza, who had the most HP, and even an upgraded Asol and Shyvana three star, stood no chance. Even the casters were calling it for EU. But, then the stream zoomed in on Jaywalkings perspective.

In game five of the Korean Finals, 8LJaywalking had a Kayle three star and he just steamrolled the competition with it. This time around, Jaywalking only had a significantly weaker Kayle two star. However, Jaywalkings Kayle in the TFT Fates Final game five was not dying. Living with just a tenth of her HP, Kayle was able to withstand the Slayer onslaught and cut Zyk0o’s win streak and put Zyk0o at one single HP, the next fight would decide the tournament.

In a fitting turn of events, the afterthought Kayle carry was able to silence the world against a Samira two star; the carry who people thought was the best in the game. Despite Kayle being dominant in the past, she was the underdog at this moment; just as Korea and 8LJaywalking were underdogs too. In the final fight, 8Ljaywalkings Kayle proved that the previous fight was no fluke, as he double killed Razza and Zyk0o to become the TFT Fates Champion. 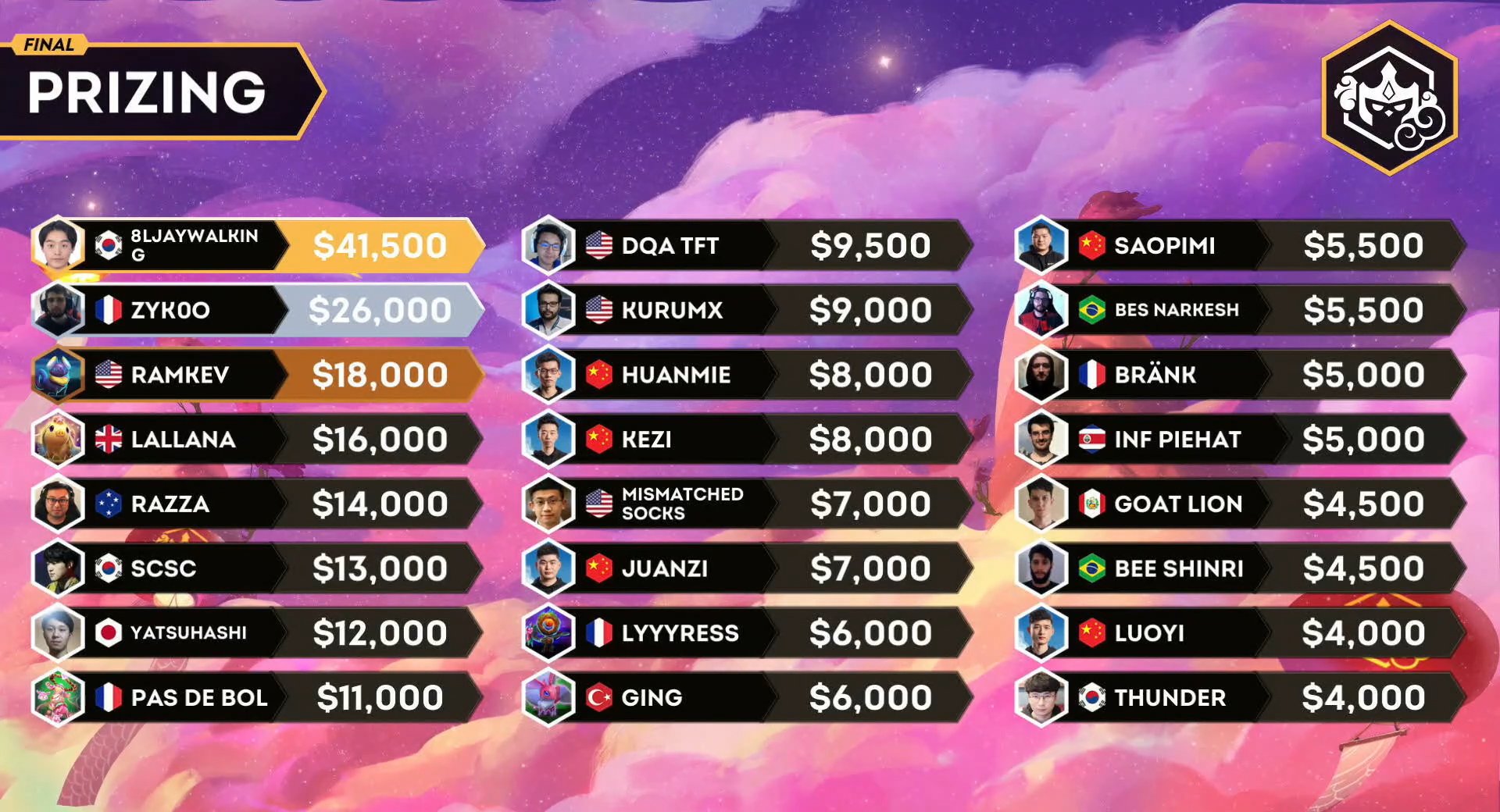 In front of 110,000 viewers, 8LJaywalking put Korea on the TFT map. Korea, for the first time, has performed exceptionally on the world stage. Two of the three representatives made it into the top eight. South Korea’s peformance may grant them more invites to the next world championship. EU performed as expected with the region converting half of their invites into the final eight. France’s Zyk0o finishing in second and England’s Lallana securing fifth. North America took home the bronze medal as RamKev quietly put on a very good showing. OCE and JP also placed their lone representatives into the top eight as well. China, despite having five players at the 24 player world championships, put zero players into the final eight. Brazil and Latin America also failed to put any of their representatives into top eight.

When will Apex Legends Season 12 release?

When will Apex Legends Season 12 release?